16Jan A Campaign to Change Lives? “I DO” Says Fairtrade Gold

On Wednesday 14th January, 2015, the Fairtrade Foundation launched its “I DO” campaign in London. The initiative aims to raise $1 million from sales of wedding rings made with Fairtrade Gold to support artisanal gold miners in some of the world’s poorest countries.

To reach their target, an estimated 100,000 wedding rings will need to be sold around the world. Fairtrade are making huge efforts to explain to the jewellery industry and the public how big a difference they can make by choosing Fairtrade Gold. Quite literally, they will be transforming lives.

According to Fairtrade, there are over 15 million artisanal gold miners around the world, typically working in unforgiving and dangerous conditions. For gold mining, many use hazardous substances like mercury, cyanide and nitric acid, which not only harm them, but also badly impact the environment. The miners often exist in conditions of extreme poverty, earning as little as $1 a day.

By working with the Fairtrade Foundation, these miners are given a fair price for their gold, so that they can earn a living wage. In addition, they can afford safety equipment, learn how to use chemicals properly and work legally. The financial boost means they can break the vicious cycle and become self-sufficient. 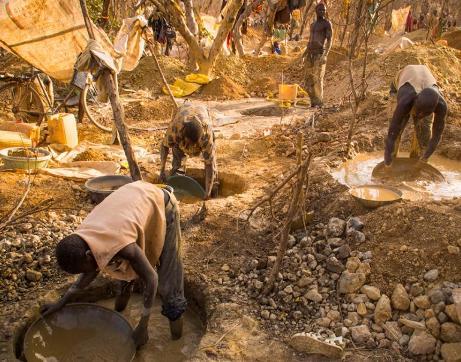 The campaign has some serious backing from the jewellery industry, especially in the UK. The Company of Master Jewellers (CMJ) is supporting the programme by encouraging supplier and retail members to get involved.

“I strongly support this initiative and urge CMJ members and suppliers to support the ‘I DO’ campaign and offer their customers Fairtrade gold products,” said CMJ Chief Executive, Willie Hamilton.

Other notable supporters of Fairtrade Gold, include jewellery designers, such as Ute Decker, Anna Loucah, Vivien Johnston and Amanda Li Hope, as well as high-profile campaigner, Greg Valerio, all of whom are long-term advocates for change in the industry.