One of the most fascinating and rare varieties of sapphire is the so-called “star” sapphire.

This member of the corundum family exhibits a clear star shape (or asterism) under certain lighting conditions. When viewed using a strong source of direct light (such as a torch or penlight), a six-ray star will appear on the surface of the gemstone. 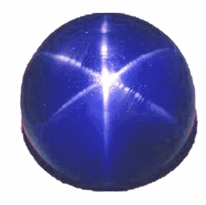 Star sapphires are typically opaque, although some examples of translucent stones have been known. The asterism itself is caused by
tiny, needle-like inclusions of rutile that intersect each other at varying angles.

Although rutile is a fairly common inclusion in sapphire, very few high-quality, natural, star sapphires are found. One of the main reasons for this rarity is that sapphires are very commonly heated to improve their colour and this heat also has the effect of dissolving the rutile needles. So whilst the heat treatment has the effect of clarifying the stone and enhancing its colour, by removing the rutile, it also removes the potential for stars.

Star sapphires can occur in various shades of blue, as well as pink, orange, yellow, green, gray or black. Vivid blue is considered the most desirable colour. Today, the most important deposits of fine star sapphire are found in Australia, Myanmar (Burma), Sri Lanka and Thailand.

One of the most famous star sapphires is the Star of Asia, a large blue gemstone weighing 330 carats (66 grams). It is a blue-violet stone with a very sharp, six-ray star, that sits perfectly in the centre of the sapphire. This beautiful gemstone is currently housed in the Smithsonian’s National Museum of Natural History.