For a gem miner in Sri Lanka (as in most parts of the world), life follows a fairly regular routine, dictated largely by the hours of daylight available and the weather conditions.

Working days begin soon after sunrise and end towards sunset, as there is often very little artificial lighting on the mining plot. Work also starts early in order to take advantage of the marginally cooler temperatures in the morning. 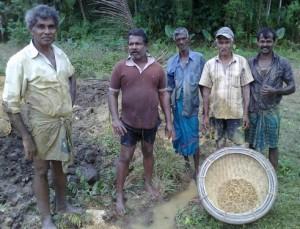 When a mine is operational, on any given day the team will be either extracting the gem gravel (called “illama”) or washing the accumulated gravel to find the precious gem material. Usually, because the teams tend to be small, it is either one activity or the other, rather than dividing labour between the two.

The miners take turns at the various roles depending on the work being undertaken, usually rotating between jobs every few hours. There are naturally breaks for mealtimes and also the team rests during the intense heat in the middle of the day. 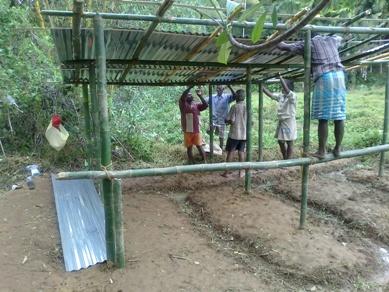 The teams tend to organise themselves and act fairly autonomously, with the more experienced miners deciding what needs to be done and by whom. There is a designated team leader, but decisions are often made by consensus between the old-hands and sometimes the mine owner. It is a generally fair and equitable system.

Food for the miners is provided by the mine owner and meals are either supplied from the local vendors, or if the mine is in a remote area, provisions are delivered to the mine and cooked on-site. In the latter case, one of the team members usually has the responsibility for cooking the meals, although there are instances where a dedicated cook is employed to service larger teams. 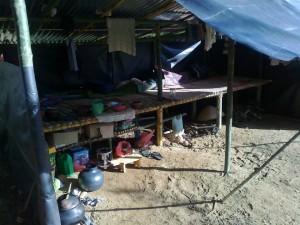 The miners tend to live and sleep on the site, as many of them travel some distance to the mining area and it is not practical to return home every day. Most mines have a workers’ hut (called a “wadiya”) that serves as living quarters, as well as a storage facility for belongings and equipment. Occasionally, the team has accommodation in a nearby guest house or even a private home.

On days when the weather is not favourable for mining, most commonly due to heavy rain, there is very little for the team to do except sit in their quarters and wait. These days are naturally quite tedious and frustrating for the miners, although the occasional, additional rest day is not entirely unwelcome. 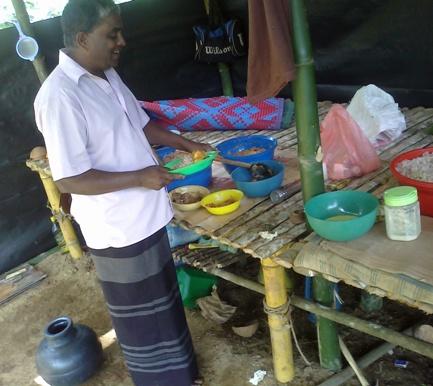 Most teams work for a few weeks at a time, before taking several days off to travel home and see their families. During prolonged periods of bad weather (and also for the Sinhala New Year celebrations in April), the miners usually return home for an extended break.

As you can imagine, the work itself is incredibly hard, even though some mines employ excavators to help with the digging or machines for washing the gem gravel. However, compared to the circumstances of many miners in Africa, Asia and South America, those in Sri Lanka enjoy a great amount of freedom and control over their working lives.

Nonetheless, by the time the sun goes down, there is little more that the miners want to do, but eat, sleep and restore their energy for the following day…